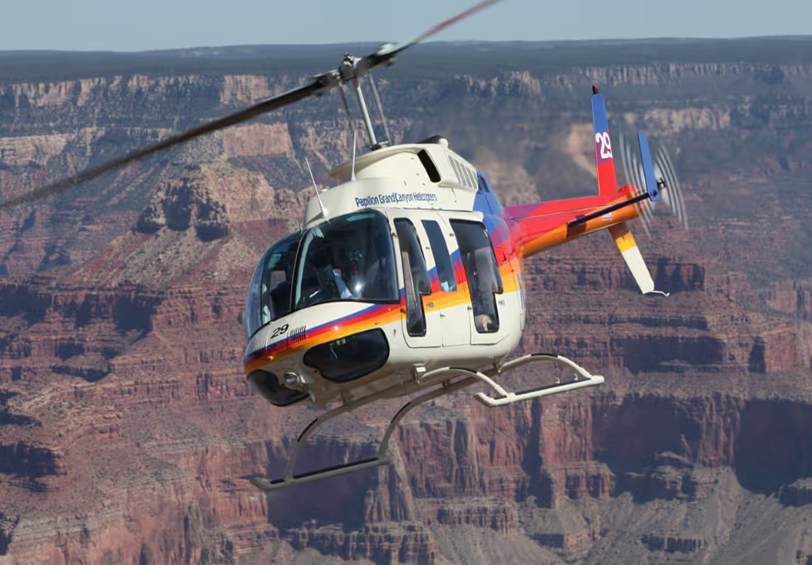 This Grand Canyon helicopter tour over the North Canyon sets off from the South Rim. Soar over the national park's most astonishing rock formations and features, with sights that include some of the canyon's oldest, deepest and widest regions.

From the sky, you'll see where the geography is at its most diverse — and nearly a mile deep. Enjoy breathtaking views of Grand Canyon National Park as you fly over the mighty Colorado River toward the canyon's North Rim. You'll also see incredible temples and buttes, including rock formations like the Tower of Ra and Vishnu Schist as you fly back through the Dragon Corridor before touching back down at the helipad. There’s no better way to see some of the oldest geology known to mankind than up close in a North Canyon helicopter tour. With the National Park Service converting the North Rim to day-use only in late 2021, this is your best opportunity to see this area up close. This exhilarating helicopter tour is the perfect addition to any Grand Canyon National Park getaway! 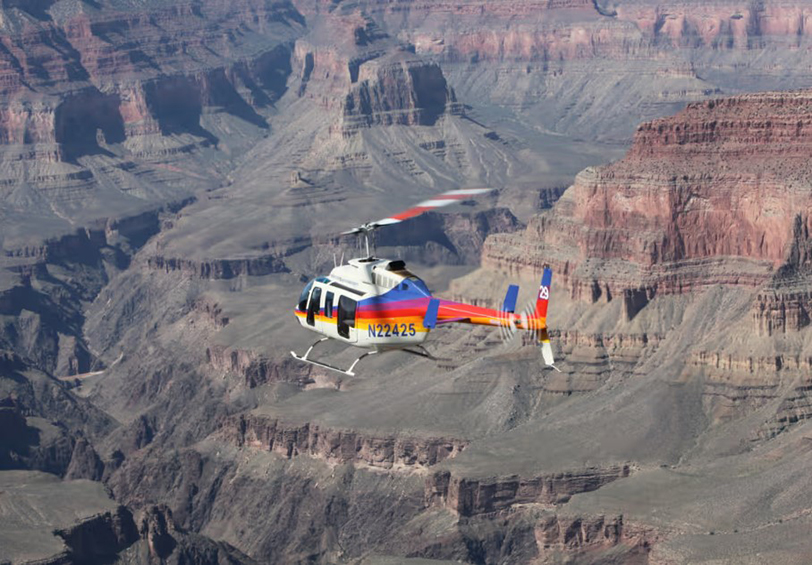 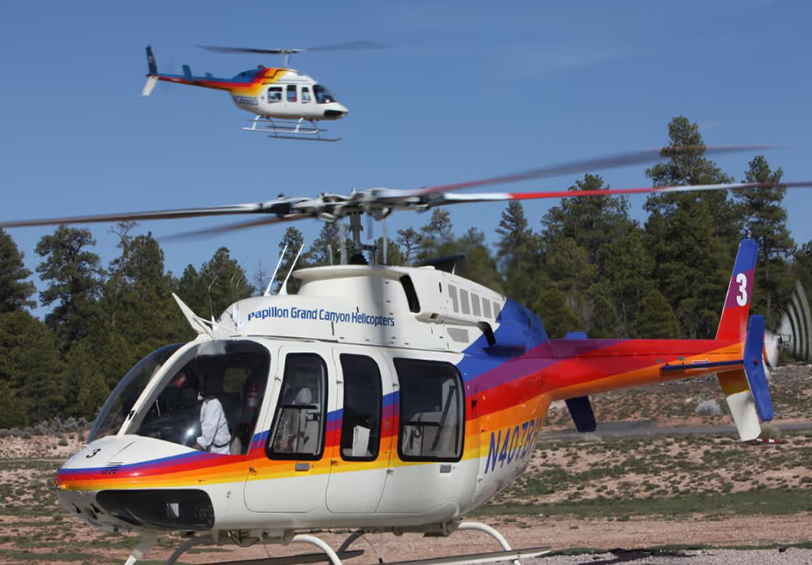 This Grand Canyon helicopter flight provides sweeping views over much of the famous National Park. You’ll see the North Rim, South Rim, and the remote Eastern regions of the Grand Canyon up close. Highlights include marvelous photo opportunities over the deepest and widest part of the Canyon and a wide assortment of geological marvels.

The Imperial Air Tour is an incredible sightseeing opportunity to take in views over a huge portion of Grand Canyon National Park. Your helicopter flight is guaranteed to access an impressive list of sights during its 40 - 50 minute duration that can only be seen and experienced from the air!

You will depart Grand Canyon National Park Airport (GCN), located at Grand Canyon South rim, on a sightseeing helicopter and have an opportunity to gaze 5,000 feet down to the river below. Your flight route will travel over the Colorado River, the rugged and remote forests of the North Rim, and a number of remarkable rock formations that dot the entire 277-mile length of the Canyon.You will soar over the Dragon Corridor—the deepest and widest part of the Canyon—on your way to the North Rim and, once there, see the rugged Imperial Point up close. You’ll enjoy unobstructed aerial sights of the colossal Grand Canyon walls and a birds-eye view of the marvels the South Rim has to offer. 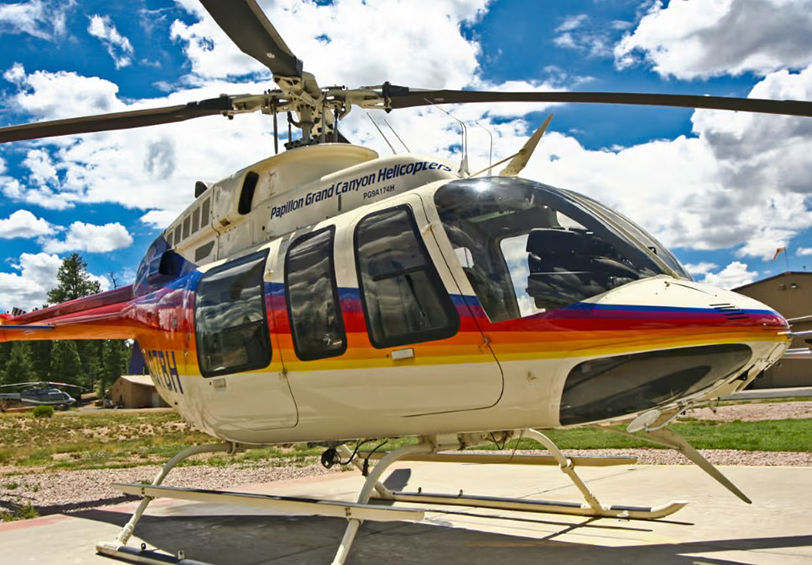 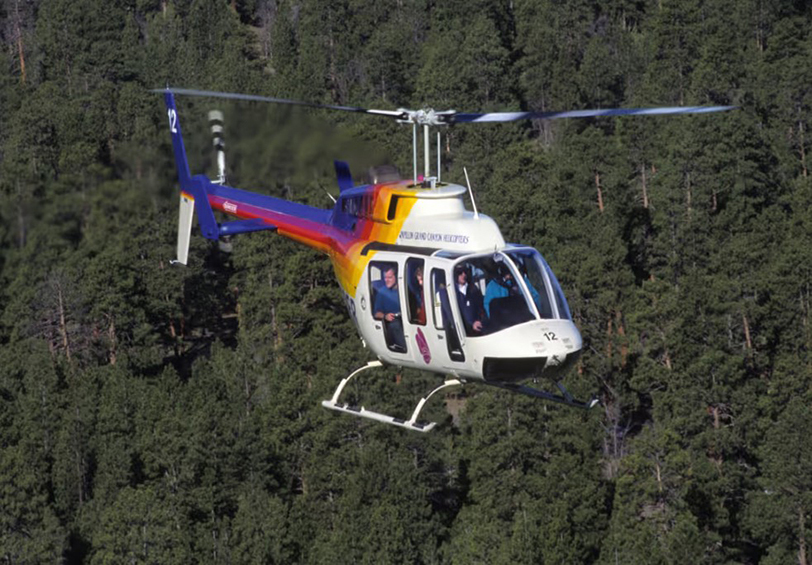 Enjoy a thrilling helicopter flight over the South Rim, with the entire aircraft reserved just for your party! You'll depart the Grand Canyon Airport and discover aerial views of the Kaibab National Forest and the deepest and widest part of the Grand Canyon in the Dragon corridor; A must see on any of our Grand Canyon North Rim tours. Also visible is the Colorado River twisting between the canyon walls, as well as rock formations like Vishnu Schist and the Tower of Ra. Passengers on both sides of the helicopter will have unobstructed views of the magnificent scenery below. An adventure reserved just for your group! 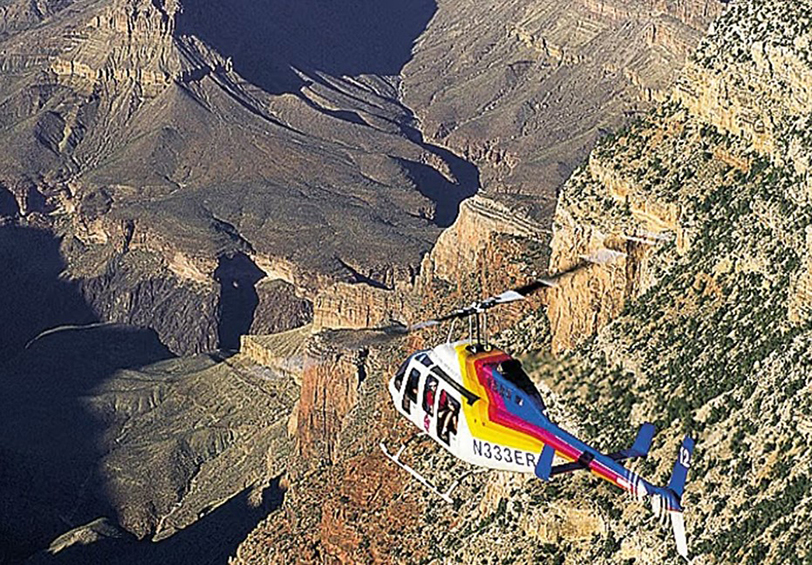 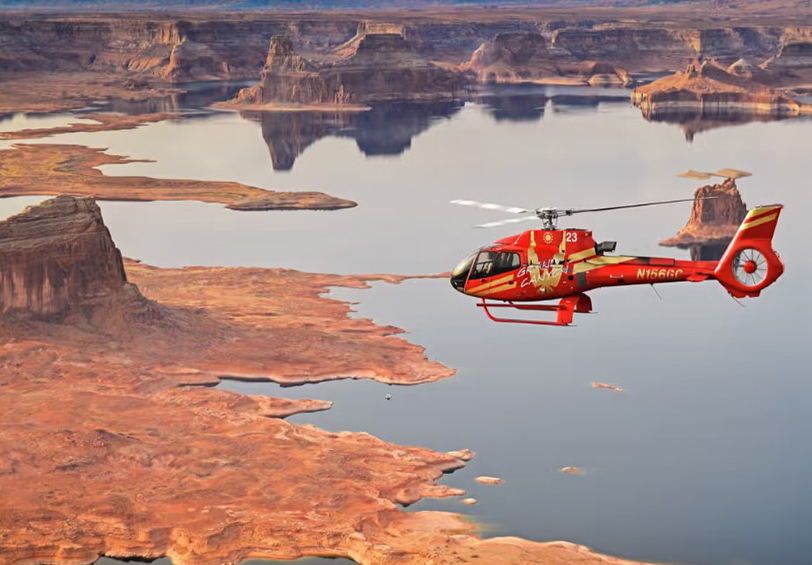 Discover aerial views of the North Rim and South Rim and Eastern regions of the Grand Canyon National park aboard an ECO-Star helicopter, featuring panoramic windows for aerial sightseeing and photography.

Striving to provide our guests with incredible sightseeing opportunities while also creating minimal ecological impact on this remarkable destination. This tour allows you to discover awe-inspiring views of the Grand Canyon aboard a first-rate and environmentally-friendly helicopter! Enjoy unobstructed aerial sights of the colossal walls of the Grand Canyon, the Colorado River, the rugged forests of the North Rim, and remarkable rock formations. These are some of the widest and deepest regions of the Grand Canyon, offering guests the most impressive sights only possible from the air. 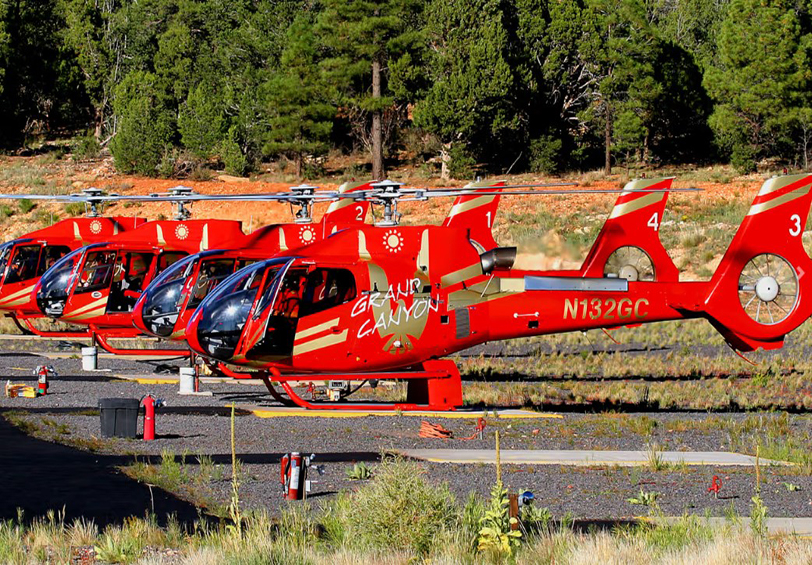 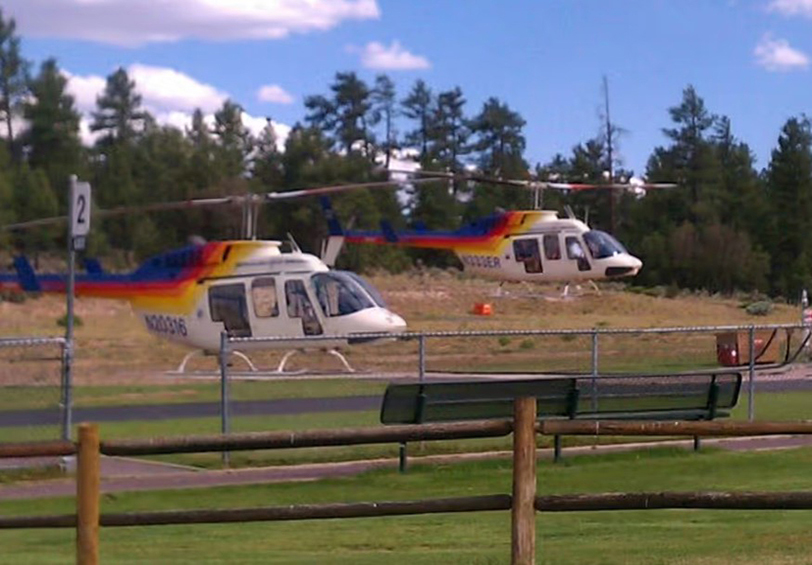 On this 2-for-1 package, you can explore the North Rim from the sky aboard a Grand Canyon helicopter tour of Grand Canyon National Park, then multiple South Rim lookout points on the ground aboard a Hummer vehicle.

Upon landing, you'll proceed to the Buck Wild Hummer Tours terminal to check-in for your Grand Canyon ground tour. Board a state-of-the-art, open-air Hummer and begin your journey through the Grand Canyon National Park, with stops at the most notable lookout points. Each stop - which can include Duck on a Rock, Yavapai Point, and Moran Point - offers gorgeous vantage points. Ample time will be allotted at each destination to pose for pictures and explore the surroundings. When your Hummer tour comes to an end, you'll be returned to the terminal so your Grand Canyon vacation can continue. 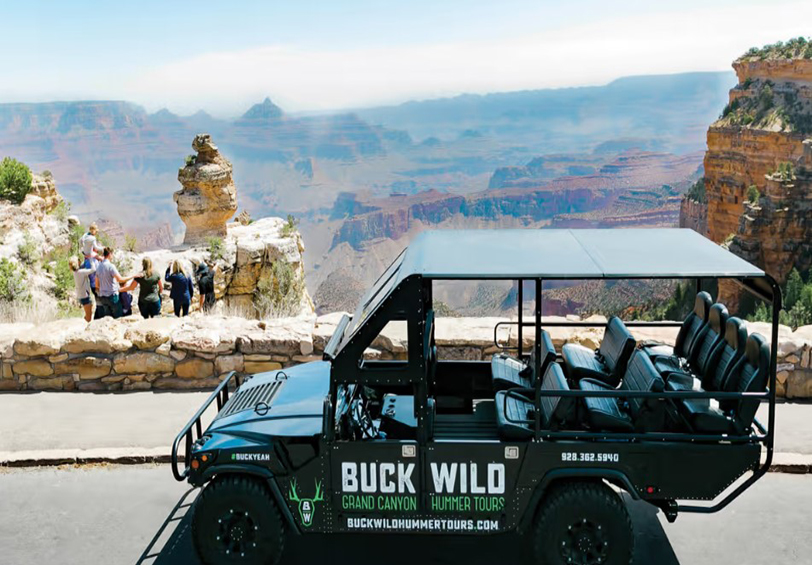 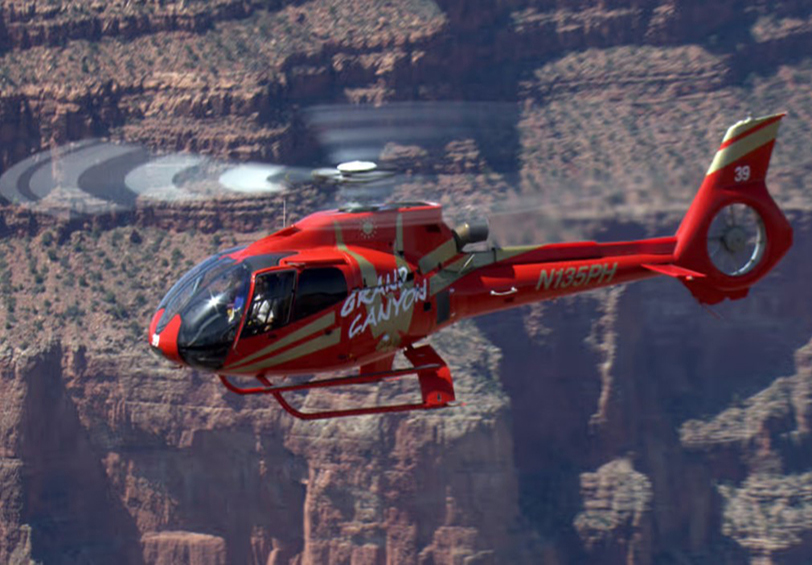 Soar over the magnificent scenery of the North and East regions aboard a private Grand Canyon helicopter tour.

Experience the Grand Canyon aboard a helicopter tour reserved entirely for your party. These helicopters have been designed with ecological impact in mind and feature lower noise to minimize disturbance. Set off from the Grand Canyon air terminal for aerial sights of the incredible rock gorges, the Colorado River twisting below, and the forested areas of the North Rim. Enjoy the most environmentally-friendly and exclusive way to tour the Grand Canyon by air! 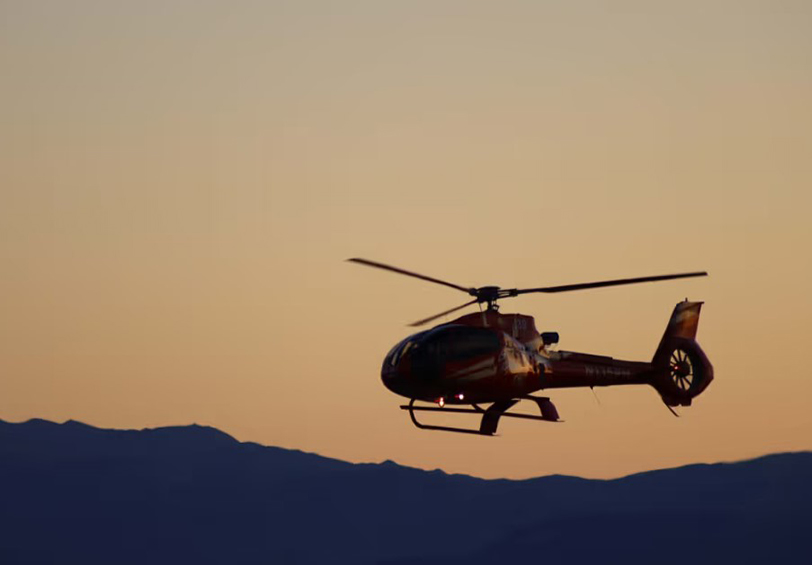 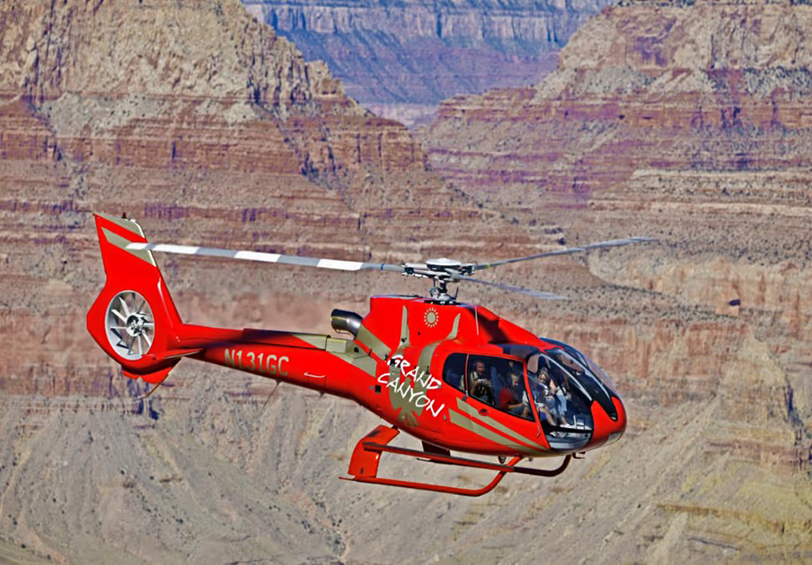 Depart the Grand Canyon by helicopter, and experience the Colorado River's breathtaking views, Grand Canyon East, Lake Powell, and Glen Canyon, as the early sun lights up the stunning scenery below. Upon arrival at Page Airport, continue the journey with a ground tour to Horseshoe Bend, a horseshoe-shaped meander in the Colorado River, and Antelope Canyon. You will explore the slot canyon as your guide tells stories and legends about the area as you capture memorable photos of the unique scenery. The return flight includes an aerial tour over Grand Canyon.

This tour gives an entirely new meaning to aerial sightseeing! Depart Grand Canyon National Park Airport during early light and enjoy the spectacular landscape below. The brilliant colors of the sunrise will bring this natural wonder to life. Upon landing at Page, Arizona, board ground transportation that will take you to the edge of famous Horseshoe Bend and Lake Powell. The contrast between the red rocks and azure blues of Lake Powell will provide the perfect photo opportunity! From there, embark on a guided tour of one of the most spectacular slot canyons in the world, Antelope Canyon. Capture the rippling sandstone walls, illuminated by the sun’s rays, for once-in-a-lifetime snapshots. The return helicopter flight back includes stunning aerial views of Grand Canyon National Park. 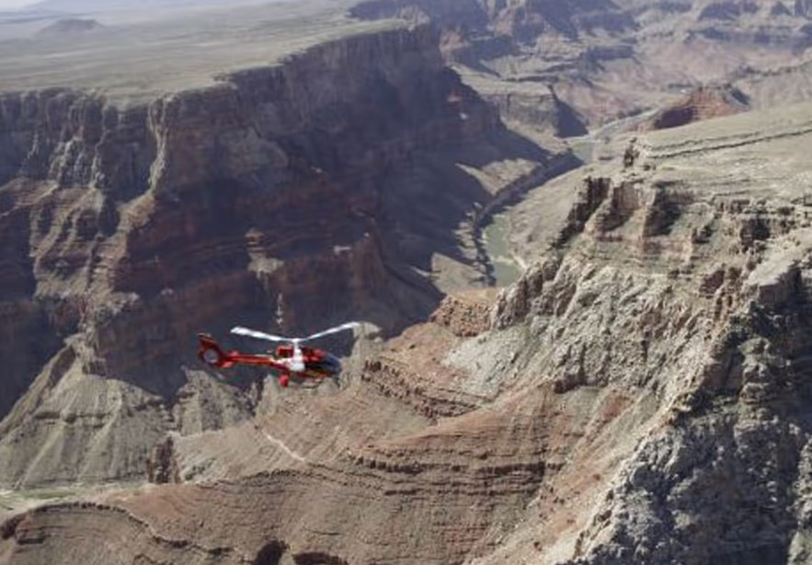 PLEASE NOTE:
Prices subject to change without notice.
FAA requires each passenger to present a government issued photo identification card.
in order to board an aircraft, such as a driver's license or passport.
Airplanes and helicopters have a maximum weight capacity as well as other restrictions on that govern the balance of the aircraft. All airplane and/or helicopter passengers will be weighed at time of check in. Passengers weighing 300lbs (136.36kg / 21.43 stone) or more will be charged a fee for an additional comfort seat. This fee is based on the product and ranges from $50 to $200.

Speak with one of our helpful reservations agents and book your Grand Canyon activities today!


Back to Grand Canyon Activities